Yes Migaloo is on his way!

Who or What is Migaloo?

Do you remember I mentioned him last year when I was telling you about Hervey Bay?
Every year at this time ( Winter ) hundreds of humpback whales cruise up the eastern coast of Australia from the waters of Antarctica where they have spent the Summer.
Most of the females will give birth to calves ( baby whales weighing about 2.5 tonnes at birth ) when they reach the warm tropical waters to the north.

They will stay there for a short time, mate again and when the babies are strong enough, they will begin the long swim back to Antarctica where they will spend the next Summer. When they are in Antarctica they feed on krill and plankton and small fish but while they are in the tropical waters they do not feed at all but survive on their stored reserves of fat ( blubber ).
Sorry for the lecture, I got a bit carried away !!!

Anyhow back to Migaloo. 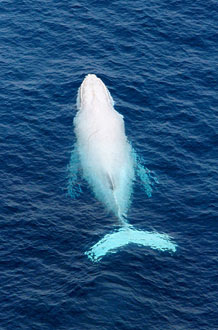 Way back in 1991 a pure white humpback whale was first sighted off the coast of New South Wales cruising north. 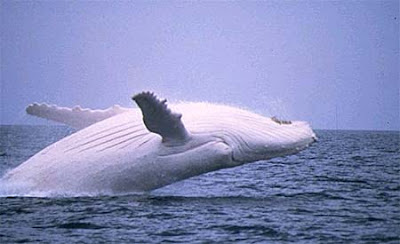 Since then eager eyes watch out for him every year. He was named Migaloo which is Aboriginal for "White Fella".

Whale Watching has become a popular tourist activity especially in Hervey Bay where the mothers and babies appear to stop for a rest and can be seen frolicking - breaching , spy hopping and tail slapping - in the protected waters of the bay. 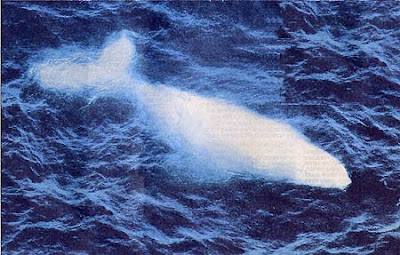 Of course there are all sorts of regulations to protect the whales from harassment. These include slow approach speeds (6 knots) when within 300m of an adult humpback, and vessels are prohibited from approaching closer than 100m of adults, or 300m if a calf is present.

Because Migaloo is such a unique whale he has special Queensland and Commonwealth Government legislation that is enacted each year to protect him from harassment. For this reason all vessels including Jet-skis are prohibited from approaching Migaloo any closer than 500m and Aircraft no lower than 2000 feet. The Fine for breaching this law is $16,500.00 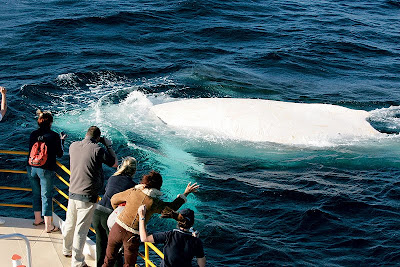 However whales are curious creatures and often they swim right up to the boats to take a look and then some lucky whale watchers get the experience of a lifetime as they actually make eye contact with the whale !!

Last year Migaloo was seen swimming with a friend - we don't know if it was a girl friend but we are waiting eagerly to see if any more pure white whales appear. 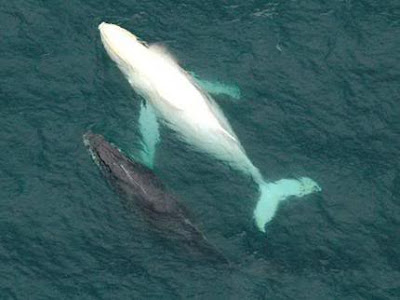 So he's on his way.
He's survived another year.
He will be off the Queensland coast soon and there will be pictures on the news and in the papers.
I'd  love to see this astonishing creature.
Wouldn't you ?
Cheers.
PS.  None of these fantastic photos are mine !
Posted by Helsie at 12:51 AM