Spring has come and gone and we are now plunged into full Summer weather.

Luckily, as yet, we have not had much of the humidity that makes our Summers so hard to cope with.

The lack of any rain at all through August to November meant that our Spring was a pretty colourless affair with the almost complete absence of annual flowers in dry suburban gardens.

Thankfully we have our lovely tropical trees to add colour to our city.

The lovely purple Jacarandas have now a disappeared from the streets of Brisbane to be replaced with a blaze of vibrant red in the form of the Poinciana trees. 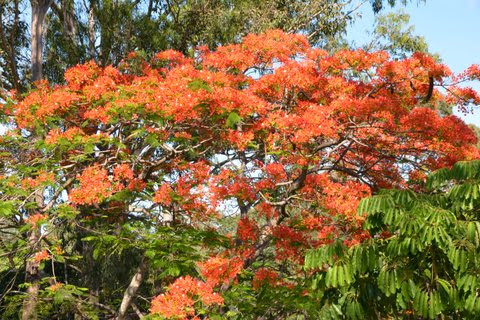 These large trees need a large garden to grow in 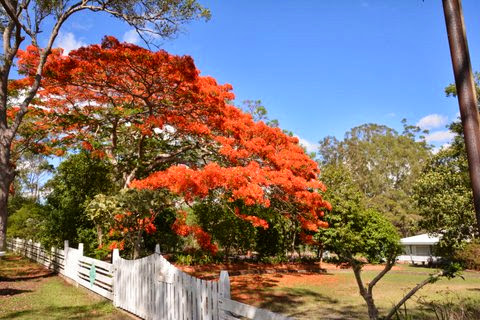 and are found in gardens and street plantings all over Brisbane especially in older suburbs where the trees can be very big. 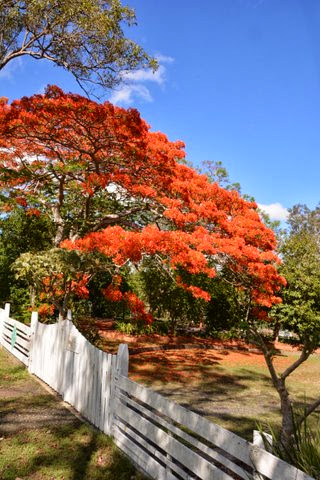 They have an umbrella shaped canopy providing beautiful shady areas in a large garden. 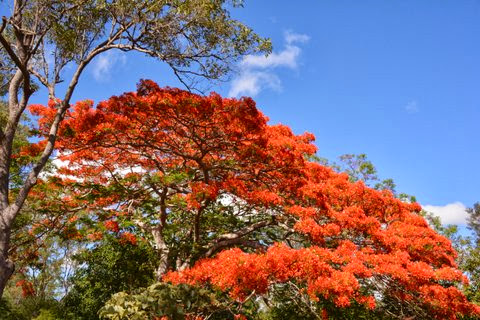 You may remember I wrote about them  here . 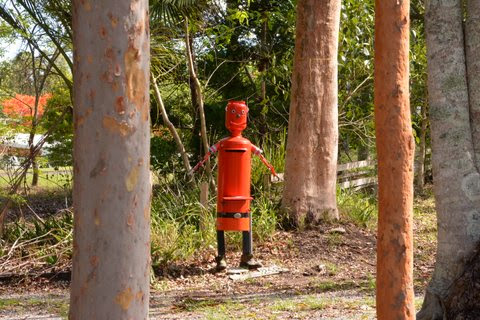 It's a mail box made out of old gas bottles ! 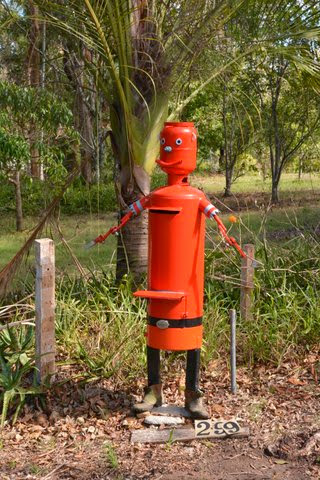 People are clever aren't they?

Collecting the mail would be fun every day.
I'd never be able to resist having a chat with him as I checked his tummy for any post. Bet the Postie likes him too !! 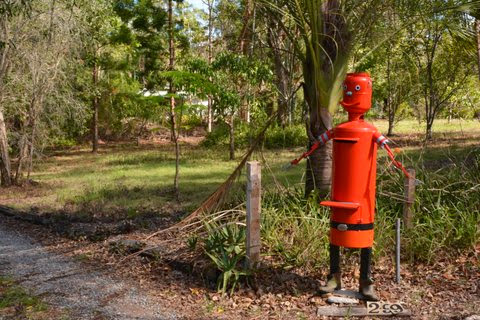 Readers of Tom ( Hippo)'s blog will surely see the link !! 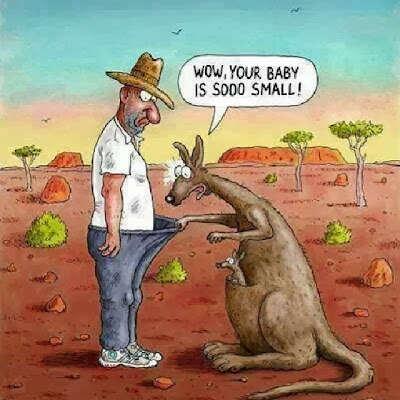 I don't know about you but in this house it is often a case of feast or famine.
That includes visits to the movies.
I have to say I love going to see a good movie.
DVDs on the TV at home are just not the same no matter how big your TV is.
Too many distractions ......
Too easy to get up and make a cuppa .......
or answer the phone........
And the sound is not the same ........
not loud enough ......
Anyhow yesterday we were off to the movies again.
This time to see Captain Phillips starring Tom Hanks. 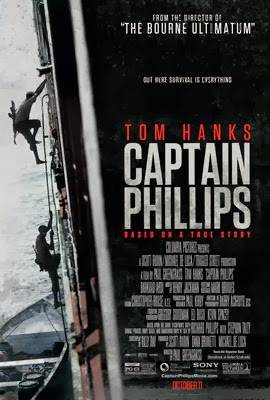 At this point in time I have to tell you that Tom Hanks is, in my opinion, just about the best male actor around.
( BTW don't you just hate that they are all called actors now not actors and actresses ? )
He just sort of becomes the character he plays.
It was no different this time.
It's a cracking good movie.
I loved it !
Cheers. 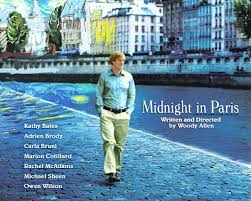 Woody Allen's  movie "Midnight in Paris" is not Academy Award material.
In fact I found the lead actor's whiney voice very annoying
but the scenes of my beloved Paris made the film a winner for me. Dabbling in the world of Hemmingway and Fitzgerald and those fascinating times in Paris when artists and writers gathered there, sparked an interest in Hemmingway in particular. 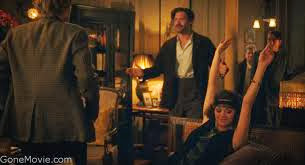 So when I came upon this book 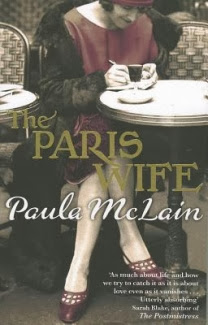 I was eager to read it.
The writer, Paula McLain, has done her research, using personal diaries of Hadley, the wife in question, letters between Hadley and Hemmingway and also Hemmingway's own memoir "A Moveable Feast" to inform her characters.


In the final pages of Hemingway’s memoir, A Moveable Feast, about his early years in Paris. , he writes of Hadley, “I wished I had died before I ever loved anyone but her.”
I highly recommend it.
~~~~~~~~~~
"The Sandcastle Girls" is my most recent read.
It was written by Chris Bohjalian -- the grandson of  survivors of the Armenian genocide ( or ethnic cleansing ) by the Turks in 1916.
This is a story of ethnic destruction and endurance that seems to have slipped below my radar.
Now that I have read about it I have picked up snippets in current affairs programs but with a million and a half people killed it seems to me to have had little coverage.
Of course this may be because it has been denied by the Turks and therefore never managed to have been afforded the recognition it deserved. 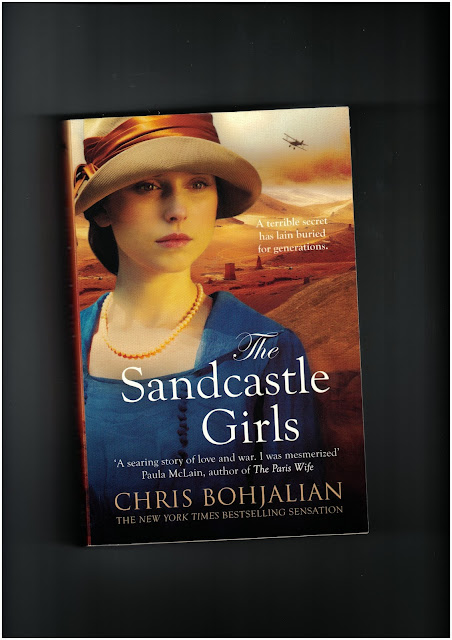 I highly recommend it.
Cheers.
Posted by Helsie at 10:29 PM 3 comments:

A LONG WAY FROM HOME 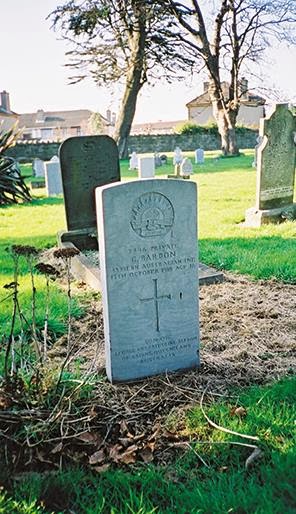 (photo courtesy of Kieran Fagan  via Julie Hawkins.)
This is the head stone of my grandfather's brother.
Two brothers went off to do their bit in WWI from the colonial outpost of the Empire,
Australia.
Both fell victim to the Spanish flu epidemic.
One survived - my grandfather.
The other is buried a long way from home in  Grangegorman military cemetery in Dublin.
Back in the country of his ancestors.
A day to remember all those who didn't come back

﻿
Yesterday, Tony and I went to see "Gravity " starring Sandra Bullock and George Clooney.
Part of the attraction was the fact that it was in 3D
so we collected our glasses and settled into the movie theatre.
There were only two other people in the theatre which was probably not surprising for a 2:30 pm week day session.
We put on our glasses and fell about laughing !
They were really dorky so of course we had to take a selfie which meant that Tony had to figure out how to make his phone camera take a photo with flash in the pitch black of the theatre. 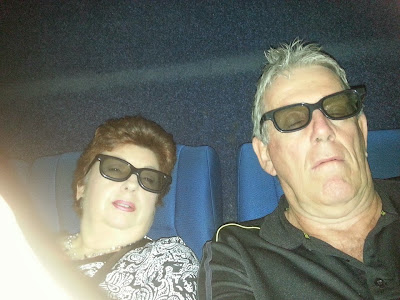 Note to self: Hold the camera up when you are taking selfy if you don't want to look like you are asleep !
Lucky the movie had not started, and there was no-one around to bother with the light .
It is amazing how liberating being almost alone in a cinema is.
We were right up the back and the other couple were right up the front.
Now on to the movie:
It begins with three astronauts deep in space 350 miles above Earth repairing the Hubble Telescope when disaster strikes.

The rest of the movie sees Bullock and Clooney struggle to survive as their space shuttle is destroyed by space debris.
Tethered only to eachother, they must use all their wits to survive and of course their oxygen supply is running out fast.

Although I'm a fan of George Clooney's looks, I was looking forward to seeing some acting to match but in reality his part was quite small and Bullock 's hyperventilating and gasping for oxygen as she tries to figure out a way to survive makes for most of the action.
In fact there are times when you realise you are holding your breath in sympathy. 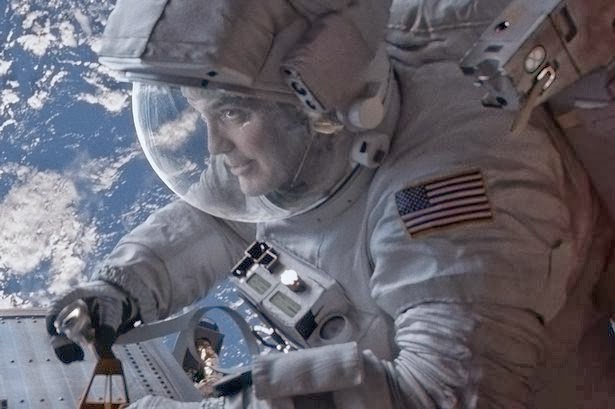 It is all visually stunning in 3D, set in almost entirely computer-generated outer space and is a little reminiscent of 2001: A Space Odyssey. 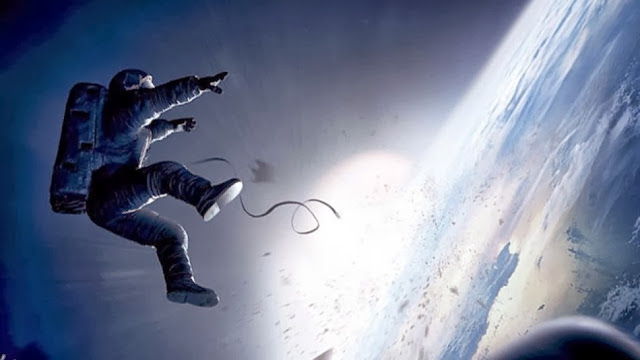 An interesting movie.
Visually stunning
For me, not Oscar material but great 3D effects.
Cheers.


It's ages since I posted about cooking here.

I guess I haven't tried anything new for a while
but recently we were having guests for dinner and I knew at once it was an opportunity to try a recipe I had set aside for an occasion like this.

It's a recipe that uses packaged store bought custard - not something I usually have in the house - and it makes a large pudding that would easily serve 10 people so not exactly something for the two of us to try as we don't normally eat dessert ~ A little fruity yoghurt is our usual dessert.


250 g butter
1 cup caster sugar
3 eggs
1 cup buttermilk
2 cups Self Raising flour
400g of  good quality, THICK, store bought vanilla custard ( you could easily substitute your own home-made here but make it thick !)
400g canned peach slices, drained
1/3 cup slivered almonds
* Set oven at 180 C ( 350 F) and grease a 3 litre dish
*Beat the butter and sugar in a large bowl of your electric mixer till light and creamy
* Beat in eggs one at a time
*In two batches stir in the buttermilk and the flour
* Spread half the mixture into the baking dish then spread over all of the custard.
* Drop the remaining mixture in spoonfuls over the top. Top with peach slices ( I though it was a bit light on with peaches and would use a big can next time).
*Sprinkle over slivered almonds and bake for 45 minutes or until golden brown 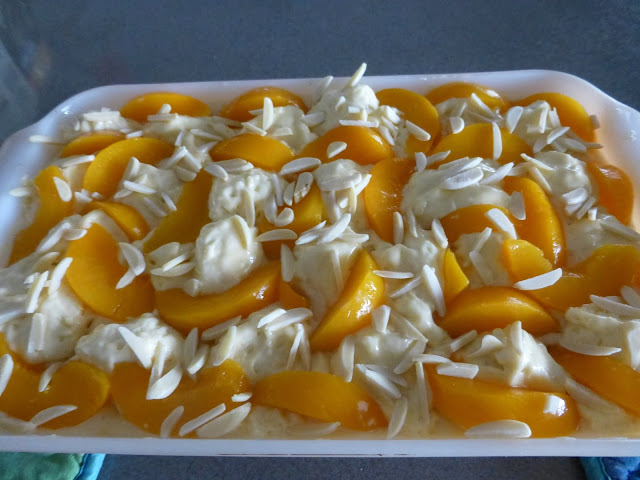 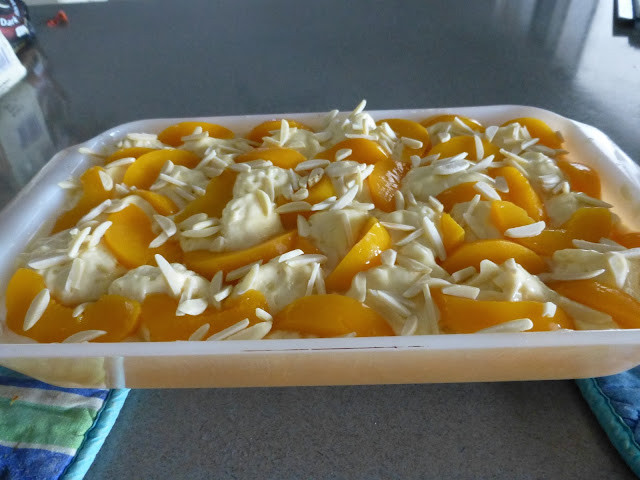 Serve with extra custard or cream or BOTH ! 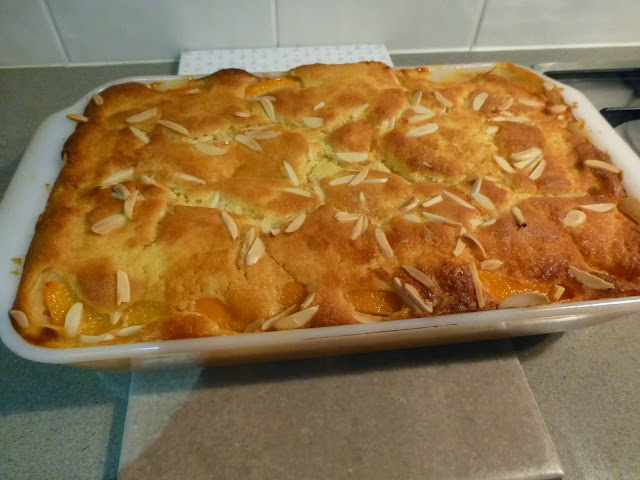 I'm off to the movies today to see "Gravity".
Stay tuned for a review !!!