Do you remember the 1960s TV series, 'Skippy the Bush Kangaroo',
or Maltida, the long eye-lashed mascot of the 1982 Commonwealth Games?
Or maybe you remember September 1983, watching the Boxing Kangaroo flag on the mast of the Ben Lexcen-designed yacht when it won the America's Cup? 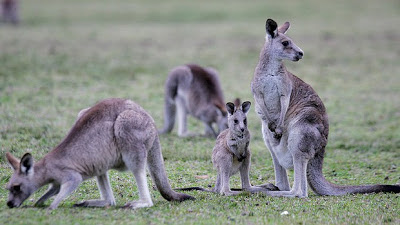 Kangaroos feature on our currency,
our Coat of Arms,
the logo of QANTAS, our national airline
as well as lending their names to national sporting teams like
the Hockeyroos,
the Wallabies (Rugby)
and the Kangaroos (Rugby League ).
Kangaroos are considered simultaneously:
a natural resource,
vermin
and a national icon that needs protection. 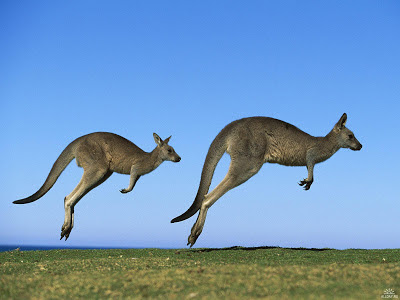 A kangaroo bounding across the Australian landscape is a wonderful sight to many of us,
but for those trying to make a living on the land who are adversely affected by its adaptability and prolific breeding it can pose a threat to their property and livlihood. 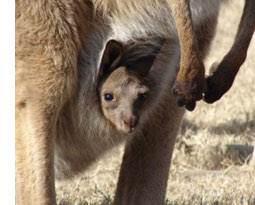 Here is a recent news article from Weekly Times:


QUEENSLAND has more than double the number of roos than cattle, prompting calls for the re-establishment of a kangaroo industry.
Data released by the Department of Environment and Heritage Protection at the end of last year showed Queensland had 25 million kangaroos, up three million from 2011.

"In 2001 and 2003, 26 million kangaroos died of starvation as a result of feed supplies being depleted by animals in plague proportions.''

Mr Burnett said due to the high numbers resulting from a surge in breeding after the good seasons of the previous years and dry conditions this year it was likely the same thing would happen again.


Mr Johnson, who has represented the outback electorate of Gregory since 1989, says numbers of the animals have skyrocketed.
"Everywhere you go in that inside central country, the roos are in plague proportions," he told ABC Radio on Thursday.
"(I have) never seen anything like it in my life. Out of control."

Mr Johnson said he'd struck six ( with his car ) in a single drive recently, and that the animals were creating a hazard for drivers of small cars in particular.

And so the debate continues.

To cull or not to cull.

The huge numbers of kangaroos are wiping out vegetation in drought affected parts of Queensland leaving no food for cattle and graziers, in desperation, are taking to "the long paddock".

While kangaroo meat is delicious, many Australians are loathe to buy it and the kangaroo meat market is apparently in a slump. ( Is their any difference to eating venison? )

Here is a Reuters photographer's report about his experience of a kangaroo cull.

It's a difficult problem.

An emotion filled debate that will never have a solution that pleases everybody.

* photos today from the Internet

It's been a cold, lazy day here in Brissy
but I've been busy finishing. 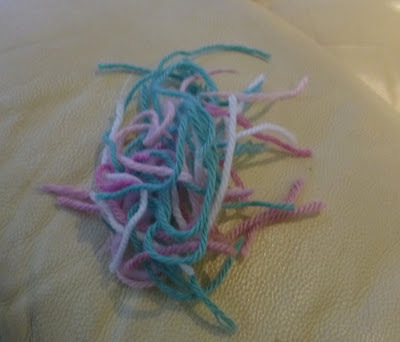 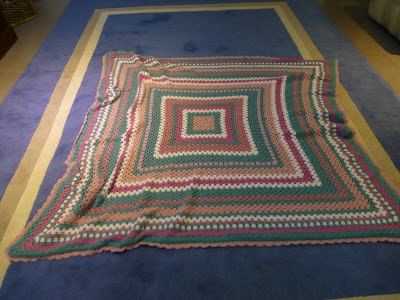 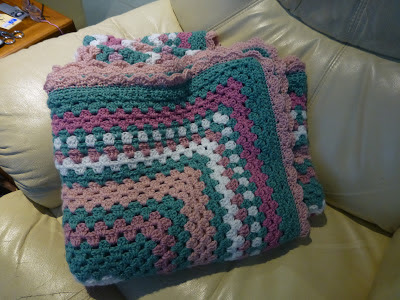 It's to match Sally's quilt.
Here you are Sally, just in time for the cold weather.
Cheers.

It probably got down to about 5 degrees Celcius.

Of course that was when I was tucked up warmly under my doona ( duvet) and fast asleep but never-the-less it was still quite chilly when I finally forced myself to emerge at about 8:30am this morning.
You see we don't heat our homes and we have large airy rooms for the hot weather and cold tiled floors.
Anyhow 8:30am is a scandlous time to get out of bed here in Queensland.
As a rule we're early risers but that's one of the joys of being retired.

The sky was blue, blue, blue and the air was crisp and there was an exhibition of old Quilts from the UK on show at the Art Gallery as well as an exhibition of newspaper photography at the Powerhouse Gallery so we rugged up and set off using our usual mode of transport to the city. 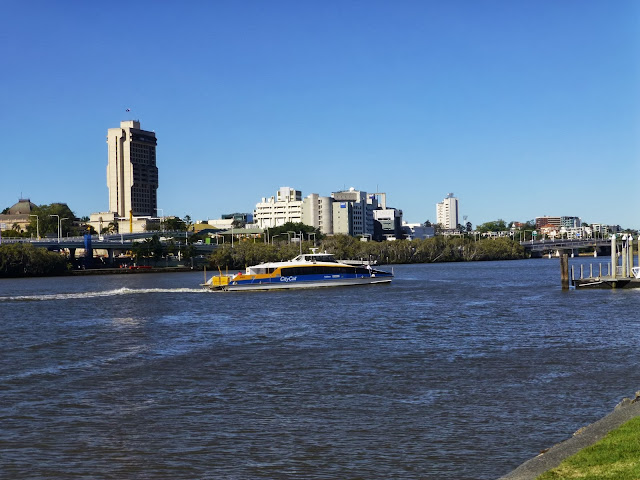 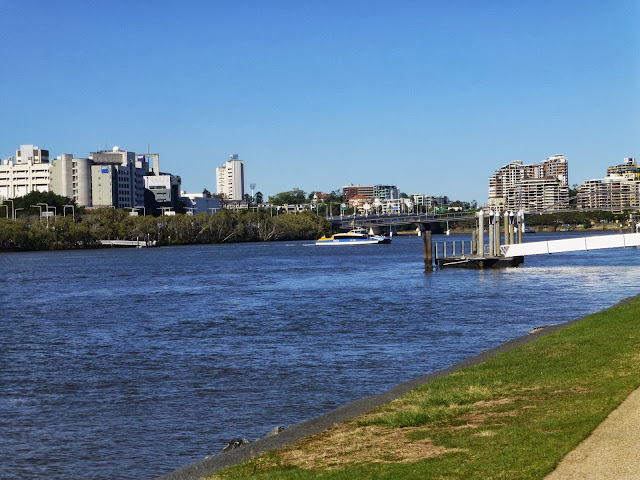 Once we were in the city we made our way to the Art Gallery which is right on the river when we  came upon this! 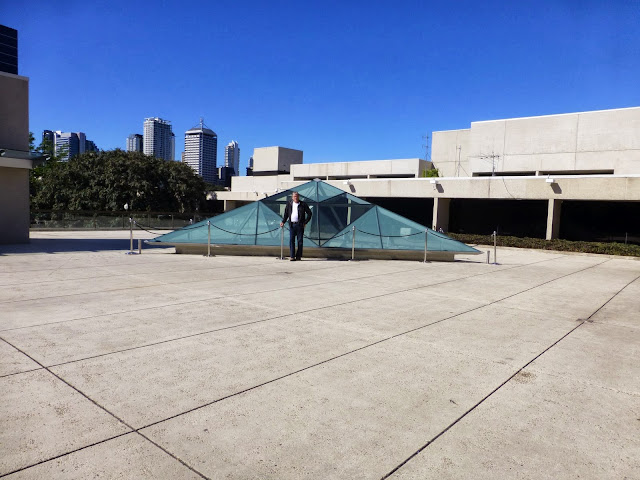 We've never noticed before but we have our own little glass pyramid just likle the Louvre in Paris !! 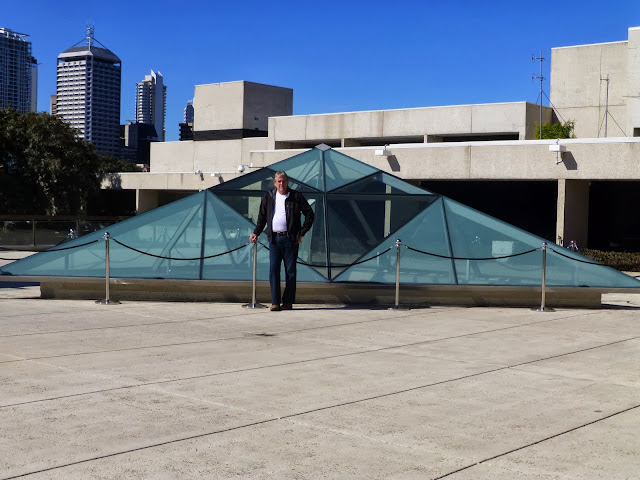 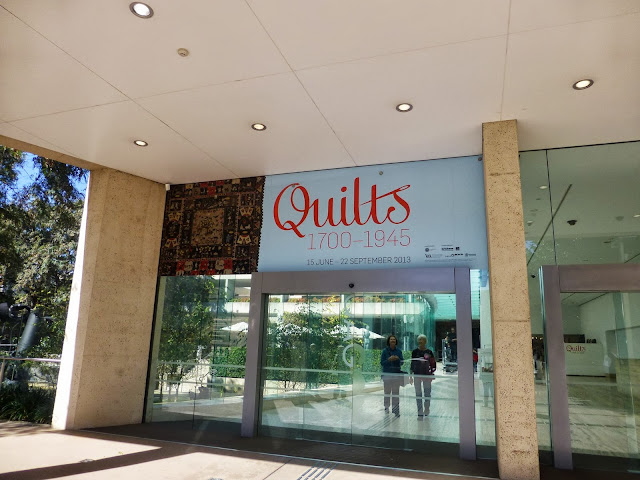 The quilts were very interesting and showed that we are still using  many of the same designs that have been used for centuries.
There was even a quilt that had been made by female convicts on their voyage to the penal colony in Van Dieman's Land ( Tasmania ). 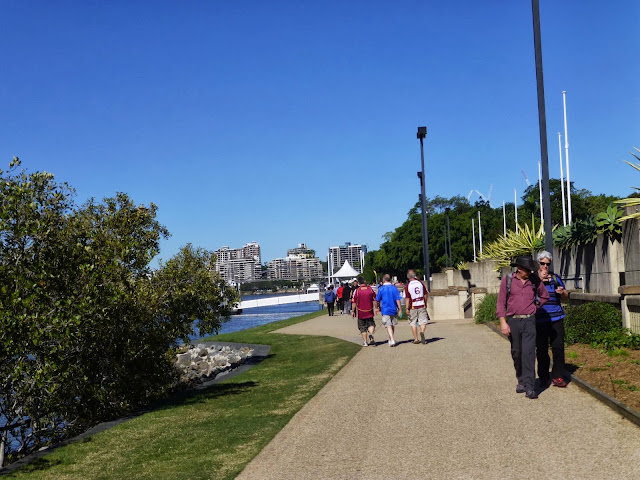 By now the temperature was about 18 degrees and walking along the river was very pleasant indeed.

A few people out exercising were in short sleeves but most Queenslanders were rugged up in jumpers, coats and boots for a cold Queensland day! 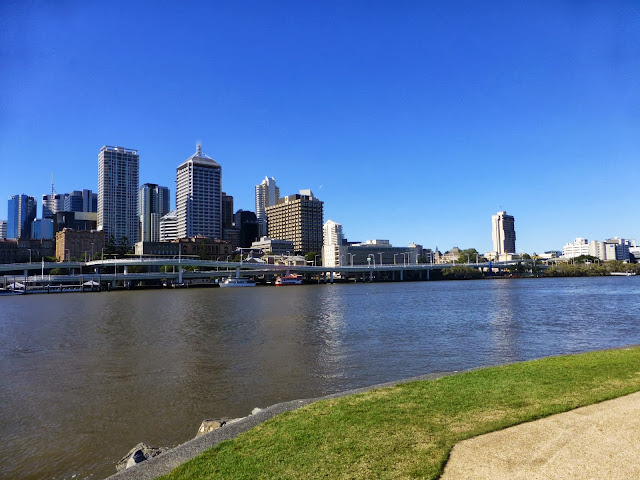 We do Winter rather well here in sunny Queensland.

We'd only been home a couple of days when my parents came to stay.

Dad had a checkup at the hospital ( all fine thanks ! ) and they decided to stay for the rest of the week to catch up with all our news.
Lovely to see them and great that they are well
but
I think I'm ready for another holiday after all those meals and cups of tea !!!


While they were here we were also babysitting
Scout, 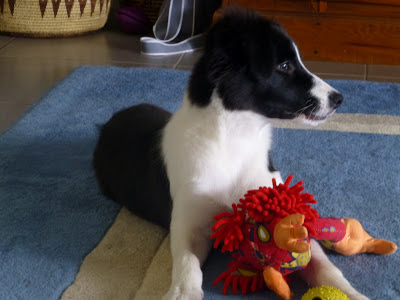 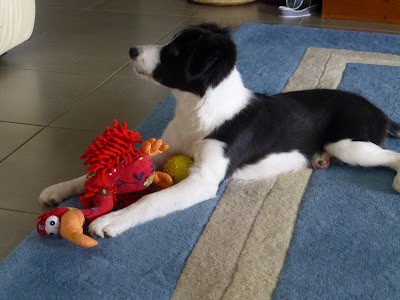 who quickly made herself at home 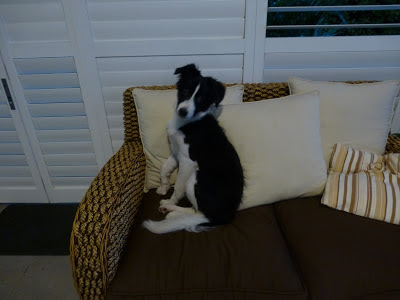 and won our hearts ( and wore us out with her early mornings !!!). 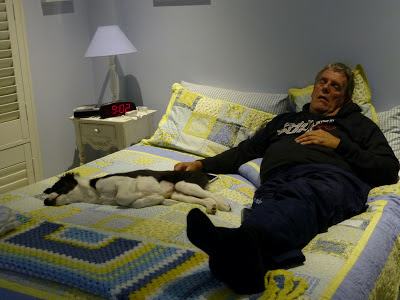 Today I've been baking for a morning tea with friends where traditionally we try out new recipes.

I tried out these two and both were a success.
It's ages since I included any cooking in this blog so I though I'd show them to you.

The first one is Lemony Squares, a sort of lemony version of a brownie. 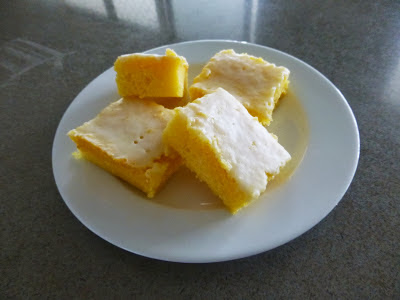 The mixture is quite runny but the end product is dense and lemony. 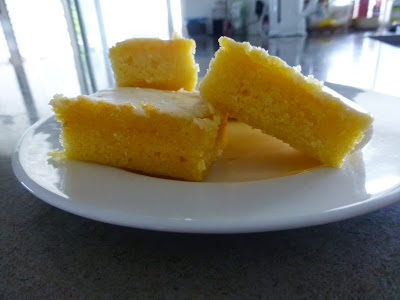 I found the recipe here.

The next one is meant for a brunch/ breakfast dish but I've wanted to try it for ages so I cut it into smallish pieces and it provided a savory slice to balance all the sweet stuff at morning tea. 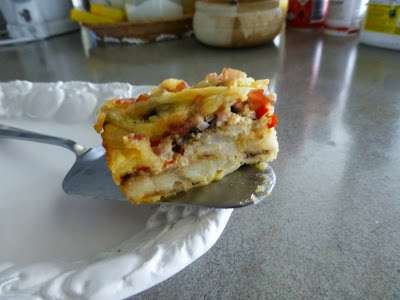 It has a base of cooked Hash Browns and was quick and very easy to assemble.

( sorry we ate it all before I remembered to take a photo !) 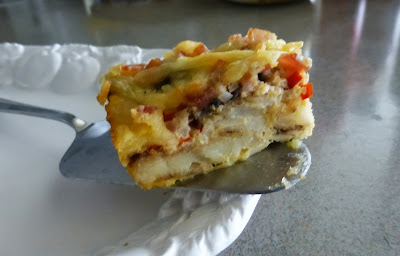 Another winner and I found it here.

So hopefully life will get back to normal soon.
There are thousands of photos to organise into Movie Makers and a holiday photo book to make using Blurb too.
I have an idea for new blog about traveling germinating in my brain too.....

and of course another holiday to start to dream on and research!


When you live in a country as big as Australia even traveling around the country can involve long hours on an aeroplane.

From Brisbane to Melbourne takes about 2 hours and
Brisbane to Perth takes 6 hours.

So contemplating a trip to Europe or the UK means facing up to a looooong time on an aeroplane.

Seven + hours to Singapore
Three hours at Singapore airport
Then another thirteen hours till your final destination. 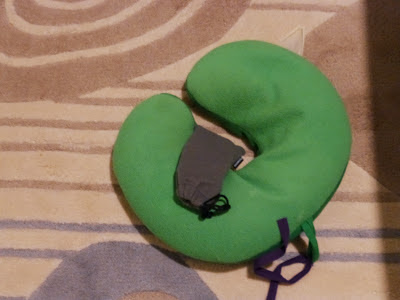 These two items are my traveling lifesavers. 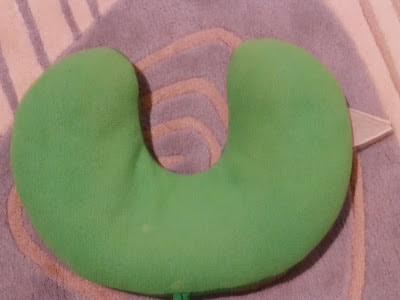 Notice it's a bit flatish instead of the usual rounded shape.
There's no way that I can use a brand new, fully puffed up one of these,  my neck's just not long enough.
This is my trusty squashed-at-home one.
I learnt the first time I tried to use it that it needed squishing down a bit before it would be comfortable and I worked on it at home until it was comfortable to sit in a chair with it propping up my head.
Now it's perfect ! 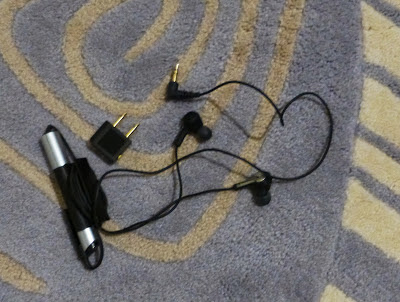 This fantastic gadget is a set of noise cancelling earplugs.

Inside the main part that is about the size of a biro there is a AAA battery and when it's switched on it shuts out about 85% of outside noise.

That means that awful, ever present sound of the plane's engine almost disappears while you watch a movie or listen to music and while away the long hours sitting in your seat.

It also helps to block out the noise of crying babies if you have the bad luck to have them near you on your flight.

You might even get a few hour's sleep and arrive at your destination ready for adventure!